Forgive me, readers, for I have moved.

In case you missed Time to Move, you can see it here.

Here I am on Moving Eve. As the dear, departed Lucinda who raised my sister and me would say, I am wo’ out and my feets is swole.

I have a bruise the size of Montana on my right shin. Thank goodness for long bathrobes. If I told you how old that bathrobe was you would send me money for a new one. I don’t want a new one, but I appreciate your concern.

The packing and wrapping is done. Mama kept an eye on us.

Okay three days. It could probably have been two if not for the hat boxes. Which I keep,  in case I am called to be an extra in the Ascot scene of My Fair Lady. It is not not normal for someone my age in 2013 to have this many hatboxes. I know that. But dear Billy didn’t say a word. 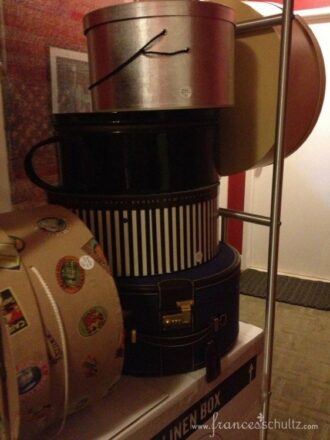 This is my man Billy at 69th Street. He and all the staff there are just terrific. Like family, really. I am going to miss them.

I got a little weepy for a minute there. “A lot of chapters,” as my sister said, consolingly.

I am also going to miss our snazzy red communal hallway. My neighbors took a leap of faith when they let me paint it red, but I think they liked it. Red is a great color for a hall because Mark Hampton said so. This was a good red. Not too orange, not too blue. Benjamin Moore Burnt Peanut Red.

Now I’m from North Carolina and I’ve seen burnt peanuts and they are not this color, but whatever. It’s still a good red.

Counterintuitively, dark colors are good for small spaces because they don’t show shadows, so the walls appear to recede and therefore expand away from you. Also art looks great on dark walls.

One of my neighbors was a curator for modern art at the Met and she had hung fab Jasper Johns posters, prints by Elsworth Kelly and Robert Rauschenberg, and a photo of Willem de Kooning about to fire up a Lucky Strike. Willem was hot in 1950. The image here is the same as my neighbor’s but I borrowed this one from Habitually Chic’s post about the de Kooning retrospective in 2011.

Movin’ on up in our case is movin’  on down and west to Fifth Avenue, which is great, and it’s the first place that is His Grace’s and mine together. Before we had his and mine, and now we have ours. (Aww.) It’s a little more space but not quite as much closet. Ahem. Not that I’m complaining. But if you have any thoughts about where these hats might go, please let me know.

No this is not a de Kooning sculpture. It is luggage. And a cooler and a vacuum cleaner. And a balled-up shirt. I styled it myself.

Maybe we put it all in a big net and attach it to the ceiling like balloons at a political convention. Just a thought.