28 February 2013–Another year has passed, make that flown, and it is Mama’s birthday again. Here below is a repeat of last year’s post. Click on the link if you want to read the comments, too. Happy Birthday, Ruth.

28 February  2012–I’ve spent most of this day trying not to write about my mama, but it didn’t work. Today was her birthday, would have been her 82nd. I’m not sure she would have liked being 82 unless she could still look and act like she was, say 62. 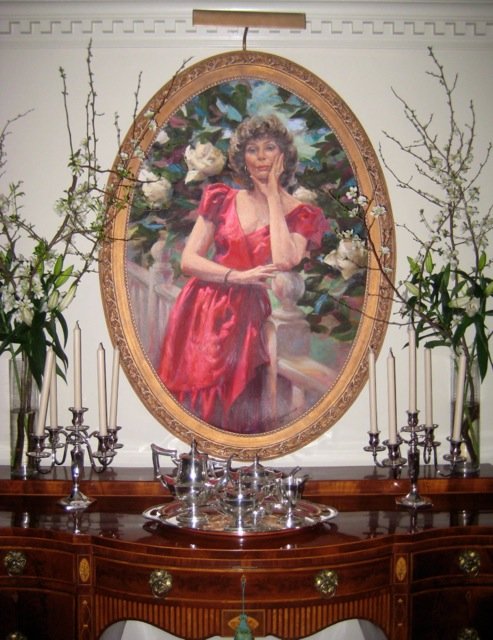 In my New York apartment hangs this portrait of Mama by Robert Bruce Williams, above her fabulous Hepplewhite sideboard, now mine.

I think I was 37 before I realized she wasn’t “36.” She was “36” for about 20 years. She did not want to be old and probably would not have been good at it. She was really good at a lot of things, though; and loving my sister and me was right there at the top. Man oh man were we lucky.

I finally found a home for most of the pretty things I inherited from her, despite the fact that 1960s New York co-ops don’t exactly lend themselves to Hepplewhite sideboards and life-size oil portraits and such. Much of it went to Bee Cottage, my house in East Hampton. Last spring I even wrote an article called “Decorating With Mama’s Things,” for The Wall Street Journal. I ended it with the story of this portrait (stop here if you’ve heard it): She told the artist in no uncertain terms, “I don’t care if it looks like me. I just want it to be young and thin.” Like all good steel magnolias, she often spoke in italics. Six feet tall in her stocking feet, she was at the time in her 50s and every bit a size 12. But in that portrait, honey, she is 36 and a size 4, max. She was a knockout.