When people think of Southern plantation houses they may think of big big white columns and broad verandas, but the house we stayed in on a recent quail hunting trip down South was a far and charming cry from the ante-bellum architectural cliché. Nestled among the pines and surrounded by camellias and blossoming redbuds, the house at Foshalee Plantation is more old-time Adirondack than grandiose Greek Revival, but the hospitality is as warm and Southern as it gets.

Built in 1922 by its then-owner Harry Payne Whitney (yes those Whitneys) the house’s exterior shingles are made of cypress and were all split right there on the property from trees in the slough (pronounced slew) of Lake Foshalee. Young boys, black and whilte, children of the families who lived and worked on or around the plantation, did much of the work.

The name Foshalee is an Indian word meaning dry lake or dry water, which is sort of a contradiction in terms but you know what they mean.  Whitney called the house the Shooting Box.

Whitney was one of many wealthy Northerners who bought plantations in the Thomasville-Tallahassee area in the late 19th and early 20th centuries and spent the winter months here shooting, riding,  hunting, and good-time-having. In fact the story goes that when Harry, as he was known, was trying to decide where to build the house, he and a buddy toured the place in a horse-drawn buggy driven by a young black employee. Of course they brought something with them in case they got thirsty. Well the day wore on and Harry and friend got drunk and never could decide where to put the house, so they asked the young fella what he thought. He pretty much looked up right from where he was and pointed –“there,” and proceeded to recommend it with great conviction. Whitney and his friend, between hiccups, agreed.

Sadly it seems Mrs. Whitney, neé Gertrude Vanderbilt (yes those Vanderbilts) was not much interested in Foshalee. She was a sculptor and art collector and founder of a little museum called the Whitney Museum of American Art and spent her summers at a little house in Newport called The Breakers.

Nothing against gilded-age marble mansions on cliffs overlooking the ocean, but Foshalee is everything The Breakers is not. Modest, unpretentious, homey, and real.

And though there have been several storied families to own Foshalee since the Whitneys, The distinct impression is that while improvements and additions have been made over time, the intention of the place has not changed. Why womp it up into something it doesn’t need to be? It’s just right just like it is: a piece of history and a peace of mind.

Which is not to diminish the house’s aesthetic attributes. A resident lizard, for example. And if he wanted to tell me how I could “save 20% or more on car insurance!”, he didn’t. He kept to himself. Country lizards are like that.

The pecky cypress paneled living room is lived-in and comfortable. The ribbed vaulted ceiling is repeated in the dining room down the hall.

The dining room’s herringbone wall paneling is handsome, and a carved molding adds another bit of architectural interest. Through the door to the left is the butler’s pantry leading to the kitchen.

Ah, and my favorite room in the house, the bar. A collection of old family photographs and other memorabilia are arranged in the compact space,

as are the julep cup trophies won through the years by the dog-loving owners in field trial competitions. 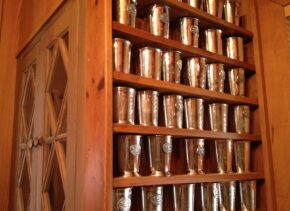 Foshalee Field Trial Trophies
This beautiful pheasant feather and pine cone wreath was on the door.

And I still love old-timey twin beds in guest rooms, though in this age of super-sizing they seem to be increasingly rare.

Or one of these… The radio part worked like a charm. I could get the Tallahassee NPR station clear as a bell and was tickled about that.

Now I had never seen one of these, but I did recognize it as a boot jack. Very handy, boot jacks.

And my personal favorite of Foshalee’s decorative accessories:

Today Foshalee is owned by the Ireland family, and ably looked after by office manager Rebecca White and her husband, plantation manager Bubba White. The office email is lmk.foshalee@gmail.com. To read more about the area’s plantations and the prominent (and glamorous!) families who owned them, see this excellent feature on the New York Social Diary here. And my earlier post on the hunting–quite a site on horseback and mule-drawn wagons are here— and on the–ahem–spitting, here.