One of the most memorable meals of my life was with a small group of friends years ago at the restaurant Georges, atop the Beaubourg (Centre Pompidou) in Paris. It lasted from 2 until 7 – or was it 1 until 8? – and went through I don’t know how many bottles of wine and packs of cigarettes. (People still smoked then.)

New York designer Vicente Wolf, who actually did not smoke, btw, was there with our mutual friend Cathy Whitworth, a designer and travel impresaria from Athens, Georgia. Another was a German prince whose family left everything to flee from East to West at the end of World War II. Vicente’s family had done the same, only 15 or so years later, fleeing from Cuba to the U.S., where he is now a citizen. The German asked Vicente if he thought of himself as Cuban or American. “Cuban,” he answered, without a moment’s hesitation.

Following my trip to Havana last week with the travel company Indagare, I prevailed upon Vicente Wolf for his thoughts on what about his homeland inspired him. His answer came again without hesitation:Despite the somewhat blighted state of Cuba today, he said, “The inspiration is the people – their sense of living and lightness of spirit.” Yes, I felt that too.

Critical as he was of the corrupt Batista regime, the writer would be heartsick at what the once-prosperous island has become. Fortunately his own house there has fared better than most, and efforts toward its restoration and preservation have been stepped up in recent years.

And yet to see it is to have the sense he just got up from his typewriter and left the room.

Its high ceilings and graceful arches reflect and frame the light exactly as they did when he composed there The Old Man and the Sea, set in the tiny village of Cojimar, steps from his door.

And that is the second part of what Vicente Wolf says still inspires him about his homeland from a design perspective. “the Latin American Colonial point of view is very different from, say, the Indonesian point of view or the Burmese point of view,” all of which, incidentally, resonate in Vicente’s designs. He mentions specifically the windows, with “all those colors,” referring to the abundant stained glass in Cuban architecture, whose aesthetic is pervaded by greenery and light. 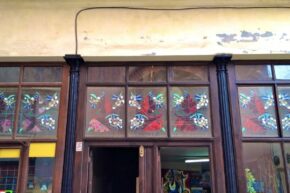 In Cuba, as in all places, the concepts of beauty and grace in design are born from the spirit of the people and the environment from which that spirit arose. I only pray that politics, poverty, and the ravages of time will not erase it. Cubans, after all, are still proud to be Cuban.

And then I think, you can’t dance the salsa like they dance it and stay in an ugly mood for long.

For more impressions of our trip and much better photos than mine, see my new friend, fellow traveler and beautiful blogger Hollye Jacobs’s posts right here at her Silver Pen.