As we are still in high season for hostess gifts, it is especially thoughtful to give things  people actually want. Tea towels are always useful, and a fresh, pretty one is always welcome.  They give your kitchen or bar a lift, and life’s little lifts add up. (Now say that three times fast.) 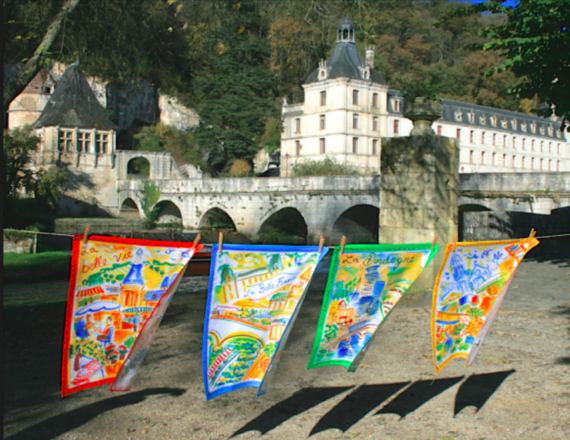 These bright and colorful Lily O’s were sent me by a friend and je les adore. Based on the charming watercolors of American artist Thomas Vieth, who, with wife Susan, founded the company, the towels are sold via the website here and in select retail outlets.

The paintings have a Matisse-like quality that is so appealing, non?

Here is the artist in action… He is from IOWA, and his name is Tom, just like His Grace (aka my husband for new readers). Beat thou cornstalks into paint brushes, I say.

When I contacted Susan about this post, I learned Tom Vieth does a lot more than tea towels. See ThomasVieth.com here, and enjoy his wonderful paintings. I also learned that a few years ago, Tom and Susan followed their dream and bought a house in the Dordogne region of France. He paints. She organizes life so he can paint. She also  pens the delightful blog, A Small Village in France.com, where you can read more of their inspiring story.

Don’t you  love it when people do their dreams?!

P.S., and en garde, Hermès… Lily O has recently expanded into scarves, also with original designs and as bright and exuberant as the tea towels.

Just don’t get the scarves confused with the tea  towels, à la Little Edie of Grey Gardens… I saw Sallie at the Piggly-Wiggly and for the life of me, she had a tea towel wrapped ’round her head...See the scarves here, available September 1. Which is right around the corner, which is un-buh-leeve-able, n’est-ce pas?

Oh, and speaking of confused, the Vieths had a cat named Lily who apparently thought  she was a parrot, as she used to perch on Tom’s shoulders as he painted and gardened. They named the company after her anyway. She must have been a character.

All images via LilyOs.com, and as ever, there is no remuneration for posts in FrancesSchultz.com. A bientôt.