One of my favorite greeting cards features a cartoon drawing of a hippo in a tutu, her rotund bottom amply exposed. “I’ve got a little behind,” she says. Well so have I. That’s what 10 days of moving gets you: a little behind.

There are elements of so-called domestic bliss that are not all that blissful, I don’t have to tell you. Moving is one of them. Moving is many of them actually, as it comprises many things: purging, clearing, cleaning, organizing, etc. This “move” didn’t involve the changing of residences but the clearing of storage spaces which including moving items from one place to another. It was a complicated process that involved three storage spaces, four towns, three states, two coasts, and three homes. “You’ll never do it,” said His Grace (my fiancé). I thanked Dr. Downer for the vote of confidence, but I feared he would be right.

And yet failure was not an option. As I shift into a new phase of life, living part-time in California to be with my fella, while maintaining homes in New York and East Hampton, it had to be done.

As a practical matter there were pieces I wanted moved: This sofa to the ranch in California, that one to Manhattan, several pieces to an artist friend for his new loft (in exchange for a painting, yes!), and many things to charity. I also wanted to stop paying to store things I didn’t need or want. The few treasures there were could have been bought again for what it cost to store them.

Moreover, as a psychological and spiritual matter, all that stuff was weighing me down. We have no idea how much it weighs us down ‘til it’s no longer there—and then oh my goodness—this albatross of subtle but insidious suppressed anxiety flies away. If you’ve done it, you know. If you haven’t, you have it to look forward to. Read on.

The dreading it is worse than the doing it. The doing can actually be liberating; fun even, because you get to feeling so damn good about yourself.

I’ll stop there. If this is a topic that resonates with where you are at this moment, then maybe you’re ready to take the next step. Or at least to educate yourself further on how to go about it.

There are dozens of good books on de-cluttering, and I’ve read a lot of ‘em. The trick is finding what speaks clearly to you. I have two:

Apartment Therapy, by Maxwell Gillingham-Ryan; and SHED, by Julie Morgenstern. 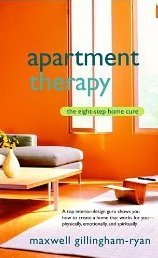 Apartment Therapy-The Eight-Step Home Cure is a little gem published in 2006. I was lucky to interview its smart young author about three years ago for House Beautiful. I laughed at myself while writing the piece because whenever I wanted to take a break, I got up and threw something out, organized a drawer, or cleared a counter. This book really makes you think about how you live in your space; how to maximize what the space has to offer you (however grand or humble); and, once you’ve edited and adorned, how to maintain your home with simple measures in your everyday routine. Eg., create a “runway” by the door for keys, glasses, mobile, mail, etc., so you always know where they are and they don’t junk up somewhere else in the house. Could be a tray, bowl, basket—you get the picture. 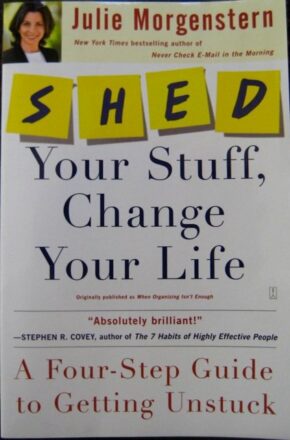 SHED, first published in 2008, was recommended by a friend, and wow. Apart from the usual benefits-of-purging pep talk and practical advice, Julie Morgenstern asks readers to de-clutter within the framework of a personal theme, in other words to determine the focus for the next chapter in their lives —egs., “balance,” “putting down roots,” “embracing your personal power”—as a criterion for what to keep and what to toss. I found this so empowering that I was able to clean out a basement, clear a storage unit, and triage a warehouse full of stuff with a fairly calm and focused mind. I could hardly believe it. Life coach and guru Martha Beck, wrote as a cover blurb: “I’ve always been amazed by the way Julie Morgenstern can organize everything—but until now, I didn’t realize that included human minds, hearts, and souls.”

Both Gillingham-Ryan and Morgenstern have terrific websites and entire communities built around their philosophies: www.apartmenttherapy.com and www.juliemorgenstern.com. Now roll up those sleeves and make a plan. Good luck, and let me know how it goes.