It’s not going out on a limb to say that tree houses are cool, a cherished childhood  fantasy  in a Moonrise Kingdom kind of way. A few weeks ago on a trip to France I was beguiled by a feature in the magazine Maisons à vivre Campagne (Country Houses) about a tree house bed & breakfast. 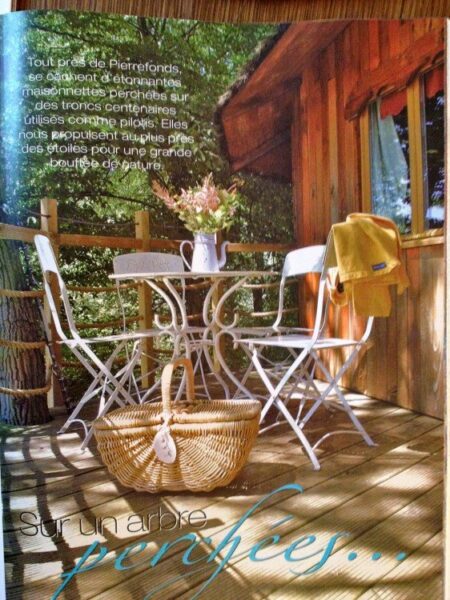 About 50 miles from Paris is Sur un Arbre Perché, situated in the Pierrefonds forest near the Renaissance-style Usson Castle. The castle, btw, looks to be beautiful and quite child-friendly, including something called the Chateau des Enigmes  – Chateau of Enigmas, wooo…. – which has a treasure hunt based on The Three Musketeers. This is sounding better all the time…

But back to the tree houses. Not surprisingly, being French, the interiors are completely charming.

In the same Picardie region is a neighboring tree house b & b, called Le Nid dans L’Arbe – the Nest in the Tree, in the Picardie region of France near Reims (Champagne) and Rouen (major cathedral and where Joan of Arc was burned at the stake).

Turns out they’re in plenty of other places as well, including the U.S., with a whole bunch of  tree house b & bs listed at About.com

So hey, there is a whole big tree house thing out there, and who knew. Take a look at these amazing tree houses from Interiorholic.com for starters…

Less exotically but more accessible is Cheekwood, the beautiful limestone manse and gardens outside Nashville, where there is a summer-long exhibit of tree houses built by seven designers based on seven works of literature, from the children’s The Rainbow Fish to Thoreau’s Walden. These are not to stay in but to play on. Wonderful. And here’s a short video.

I confess that at about the tender age of 5 my own treehouse dream was dashed in the pelting rain of reality, in the dark of night, in Anne Louise’s back yard. Such intrepid pip-squeaks, we, spend the whole night in the tree house by ourselves. Not that anyone else would have fit.

And then the heavens burst, and Mother Nature unleashed her full force and fury upon our tiny, splintery box in the branches.

Okay it was built on telephone poles, but don’t spoil the romance.

We are talking a Wuthering Heights-style thunderstorm here.

But Anne may need to check me on that.

Anyway at Lord knows what hour Anne’s sweet daddy  swam out to rescue us,  climbing up that rickety ladder, clutching us, and carrying us into the house. In a matter of minutes we’d gone from Isak Dinesen and Amelia Earhart to two little sodden, stringy-haired lumps in smocked nightgowns. Anne’s daddy was the hero. He will go to heaven for sure.

Now it’s not to say I wouldn’t try it again. If there’s no rain in the forecast.