What is greater than sleeping in the great outdoors… (well I can think of a few things but bear with me …) a celestial canopy… wind whispering in the trees… heaven. Yes it’s heaven until a mosquito buzzes, a critter comes poking ‘round, or it rains… but sleeping under the stars was a childhood dream of French designer Pierre-Stephane Dumas. Years later as an adult on an artistic whim, Dumas echoed his dream with a kind of spherical tree house he created for an art exhibit. Today that tree house has evolved into Dumas’s  CasaBubble–and a bonafide business. We’re always hearing about bringing the outdoors in. This is bringing the indoors out, and people are buying it.

This weekend, June 22-24, CasaBubble will exhibit for the first time in North America at Dwell on Design in Los Angeles, curated by the editors of Dwell Magazine and the West Coast’s largest design show.

You can’t help but smile. Crazy, original, whimsical, fun. “Practical,” however, does not spring to mind.

Yet they are more practical than you might think. Dumas’s partner and fellow Frenchman, furniture designer Frederic Richard, took time out yesterday from setting up the booth at Dwell on Design to chat. “It’s the easiest way to augment your living space,” he says, “and you don’t need a building permit.”

Assembled on wooden platforms with hi-tech construction and  low-energy power and cooling systems, Richard says the bubbles make virtually no impact on the environment, and that’s one of the selling points. He sees a market in the growing eco-tourism industry. Event planners show interest, as well. Bar mitzvah in a Bubble!  Or maybe we could mandate them for members of Congress. Transparency in government! The possibilities are endless.

“They’ve become big in the bed & breakfast business in France because the owners recoup their money quickly,” he says. Depending on the model and accoutrements, the bubbles range from about $9,000 to $18,000. Later this summer Yosemite National Park is installing one as  an experiment. “We’ll see,” says Richard, “I think they will use it as a sort of lounge, but perhaps people will be able to rent it also.”
I’ll be curious to hear how it goes. 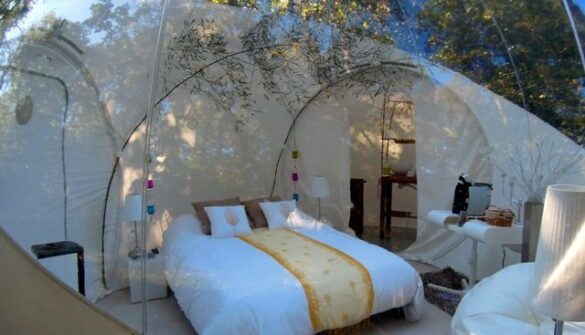 Other customers are individuals. One fellow in Manhattan is setting one up on his roof. It’s supposed to be a bad year for bugs in New York, so maybe this is a brilliant idea. Another wants to suspend a bubble between her house and the trees outside as a playroom for her children. Really? “Yes,” says Richard, “in Beverly Hills.”

I’ll really be curious to hear how that goes.

Others are just putting them in their back yards.

Wouldn’t the bubbles become like ovens in the sun? Wouldn’t people inside them cook? No, he says, because of the ventilation technology. But if it’s hot it’s better to have them in the shade. They’re also working on developing “shade wings.” What about privacy? Beside the point, Richard counters in his charmingly accented English, “Zee i-dee is to be com-fort-ably and lightly in zee nature, as if you were dropped into zee nature.” Voila.

But what about the birds? Do birds crash into them? Richard says, “I think they perfectly see the reflections on the surface and avoid any good/bad surprise!” (I thought it indelicate to broach the subject of other bird “surprises.” That is what why we have zee Windex.) “However,” he adds, “in Paris we made a bubble full of butterflies. It was amazingly beautiful.”

If you’re not in L.A. this weekend, the CasaBubble website is extensive and informative, and Frederic himself is graciously accessible. All photos courtesy CasaBubble.

P.S. You already know this, but I receive no compensation for this or any other post on FrancesSchultz.com.