I have been about to bust to write this but was saving it for the perfect time. Which is now.

If you, like me, have gone into a post-Downton Abbey decline, take heart.  Miss Fisher’s Murder Mysteries will have you obsessed anew. Men like it, too. If not for the fabulous clothes, then for the murder, scandal, sex, glamour, good stories, and great characters.

Unlike Downton, which His Grace (my husband, for new readers) does not watch on account of the absence of heads being blown off; Miss Fisher he loves. The balance of un-gratuitous violence, gleeful-but-tasteful sex, and a sassy, hot star seems to work for him. But then he is a man of simple tastes.

Set in the roaring ’20s in Melbourne, Australia, the series is based on the novels by Kerry Greenwood and produced by the Australian Broadcasting Company. After two seasons, there was such an outcry for a third–I mean people went crazy– that there is indeed a third. Yay!

Seasons 1 and 2 are available on Netflix. Sadly it hasn’t been widely broadcast in the States, but maybe that will change. Here is a taste via YouTube  trailers. Or you can take my word for it and order the DVDs on Netflix, or your indie bookstore, or Amazon now.

Some of you already know Private Detective Miss Fisher. I learned of her when a friend  emailed to ask if I’d seen it, because she said Miss Fisher reminded her of my mother, which she totally does, btw. I ordered the DVDs quicker than you can say stiletto-in-her-garter-belt–which Miss Fisher keeps, along with a pistol in her minaudière.

Phryne (pronounced FRY-nee) Fisher is as glamorous and mercurial as her counterpart Detective Inspector Jack Robinson is earnest and no-nonsense. The tension between them, sexual and otherwise, is as fun and suspenseful as the crime-solving itself.

Love interest notwithstanding, even the most casual observer would note that Miss Fisher is in no hurry to settle down. She is most enthusiastic for the opposite sex, however, be he aristocrat or  circus performer. An equal opportunity inamorata and feisty feminist, our Honorable Miss Fisher is quite the sport.

…or that she was not feeling “up” to it when her maid called.

His Grace thinks she has nice… hats.

Well, Melborne is a long way from Downton. Australia is not England, in other words, much as Aunt Prudence would like it to be. (Of course England is not always England, either, even in Downton A.) You will love Aunt Prudence.

There are a bunch of other characters, too, like Cec and Burt, “wharfies” and small-time hustlers she recruits to her cause; a super-cool butler named Mr. Butler; and a doctor who is likely a lesbian with a strong penchant for scotch. Assistant-slash-maid Dot is turning into a feisty little thing herself, having overcome her deathly fear of the telephone, if not her devout Catholic upbringing.

The show is also beautifully shot. 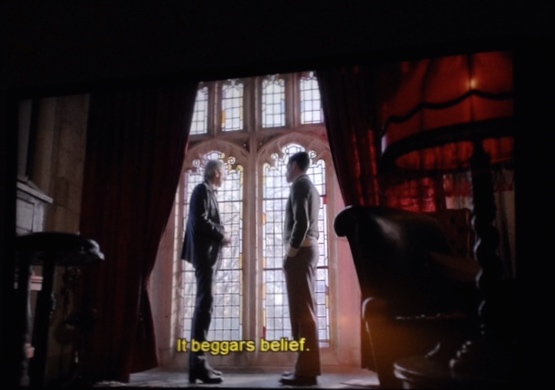 Apart from the absence of heads bowing off, there is barely a meth lab in sight, nor is there a preponderance of bleakness, negativity, and despair. I don’t know about you, but I don’t want to be banged over the head with all that  in my “downtime.”  Or ever, for that matter, but life doesn’t always let us change the channel. TV does. 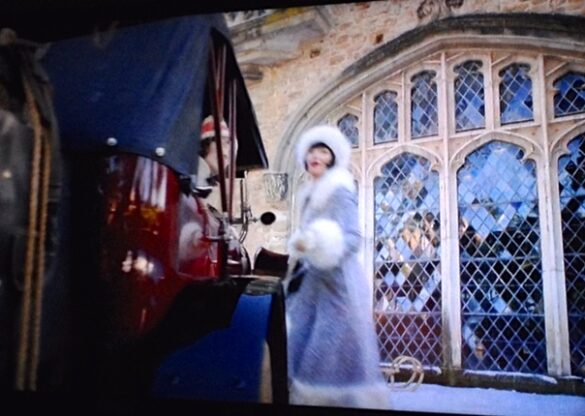 HG and I may just find ourselves re-watching Phryne and Jack. They are on a first-name basis now, and when we last left them, they were at the piano together singing Cole Porter’s “Let’s Misbehave.” Season 3 should be a doozie. Let us know if you hear anything, and we’ll watch for local listings.

Oh, and thanks for the great recommendation, Miss Sandra! Miss Fisher does kinda favor Mom… Wonder if there’s something she didn’t tell me…