For anyone working on a kitchen just now, House Beautiful includes a “kitchen of the month” in every issue, and they’re always full of good ideas, even for those of us working with what we have. 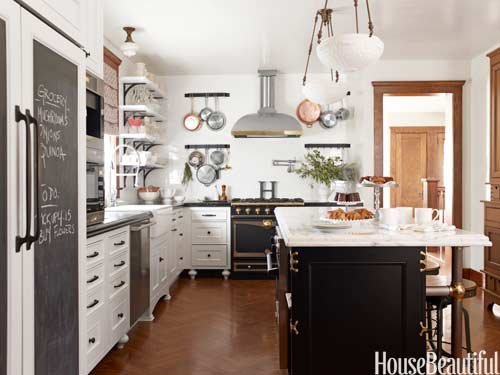 For the April issue – off the newsstands but now online – I interviewed New Jersey designer Nicole Hough (delightful, btw) about her own fab kitchen in an old house she has renovated for her and her busy young family.

I won’t repeat the interview which you can read here, but rather touch on a few elements that impressed me most. First of all, the variety of materials, surfaces, and finishes give the kitchen warmth and visual interest, from the wood floor, to the marble shelving, to the black painted island, to the metal and brass pipe fittings supporting the island counter, to the way the pots and pans are hung on racks on the wall. It ain’t just another sterile white kitchen. (I don’t need to see another one, do you?) And note how the legs of the cabinets look more like furniture than built-ins. The designer was keeping with the early 20th-century period of the house.

I can only dream about that gorgeous La Cornue range. Nicole says it was a dream of hers, too. When she was just starting in the design business she sold La Cornue ranges and has loved them every since.

Off the top of my head I know three houses–including ours at the ranch–with one of these Miele built-in coffee makers, in photo above to the right of the fridge, and everyone loves them. I am normally leery of built-in gadgetry, but this one’s a winner.

You immediately know this is a real kitchen with real people cooking in it–which is refreshing, no? It’s also a kitchen for hanging out. Seating at the island counter as well as the banquette in the corner makes the room functional and inviting as well. It also gives people a place to be out of the dadgum way of the cook. This is something anyone planning a kitchen needs to think about.

Baskets add texture, warmth, and storage. If you wanted to convert some of your drawers into baskets, it’s do-able with a little ingenuity. Baskets can also become “drawers” on open shelves, with pretty labels or tags.

With all the open shelving displaying the pretty things–glassware and china–you still need a place for the not so pretty things, like Cheerios and canned tomatoes. A massive armoire, built-in but designed to look free-standing, fills this role, although putting staples like rice and flour in canisters turns them into kind of pretty. Nicole says this part of the kitchen is also a major pass-through, so all those little apothecary drawers are catch-alls for family flotsom and stuff–keys, glasses, chargers, etc.

And the coolest thing she told me about was the toe-kick in-floor vacuum, where you just flick up the top with your foot, sweep toward it, and boom, all your troubles are sucked away.