It was a dark and stormy castle…

Ominously begins the sequel to earlier posts Wine, Women and Watercolors (Painting in Italy – Part 1 and Part 2) Week 2 of summer sojourn begins with the Principessa (aka Carolyne Roehm) and me flying from Rome to Paris to meet our menfolk and friends, and then to cycle around the Loire Valley at the end of May.

Call it “Bottles, Boys and Bikes?” No that sounds awful.

Land of storybook chateaux and glorious gardens, the Loire had its heyday during the 16th century French Renaissance, reigned o’er by François I and his son Henri II.

France was reigned o’er, and we were rained o’er. But if you have to be in bad weather this is not a bad place to be.

A bicycle, however, might be a bad place to be. Just saying.

Dark and stormy, but a beautiful castle. This one is Chenonceau, one of the most famous. The grace of its size and scale makes you think, “I could live here,” whereas you wouldn’t take Versailles on a bet.

Diane de Poitiers,* stylish and savvy mistress of Henri II;  and the formidable Catherine de Medici, wife of Henri II, both lived here. Even castles can be small at times.

The ballroom gallery is stunning. Like many grand houses in Europe, Chenonceau also served as a hospital during World War I.

The outbuildings are charming.

As of course are the gardens. The Loire Valley is known as the “garden of France” as well as the “valley of kings.” 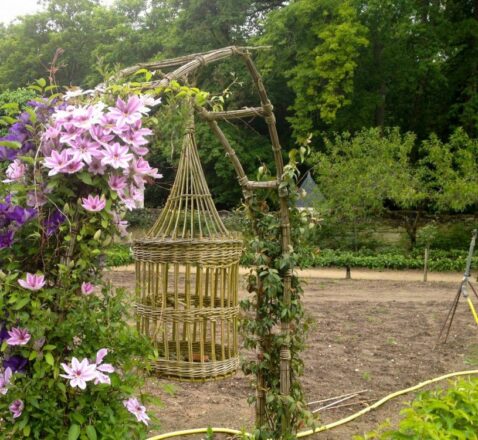 Also charming of course is His Grace, aka my husband, and his charming fluent French, which consists entirely of “Magnifico.” If you followed our trip to Burgundy last year, you may recall this compelling linguistic detail.

Here’s another compelling detail: electric bike, by Trek. You still have to pedal but a small battery-powered motor gives a boost. Brilliant. Flies up hills, it does. Sparks envy in the very soul of Evil Knieval himself.

Just don’t forget to charge the battery and end up on the side of the road in the middle of effing nowhere and have everybody looking for you for hours, or you might end up in the magnifico maison du chien,  hypothetically speaking.

When the sun comes out you’re so happy to be on a bike because you get to stop and stare at a field of poppies and imagine you are in a Renoir painting.

Or look out your hotel room window to a lovely courtyard.

Then visit to an ancient monastery on the grounds of a farm and be shown around by the farmer whose family owns the property and continues to work the land around it.

Followed by a picnic lunch by the fire, all organized beautifully by outfitter Rachel Foulkes (rachelfoulkes@aol.com).

Then back on the bikes. Stopping along the way discuss blow-dry techniques with miniature ponies.

I have never seen a fluffier mane on man nor beast. Except possibly that of my friend Jonathan Mermagen in London.

Wait, Jonathan, is that you?

…and wait’ll you see this…