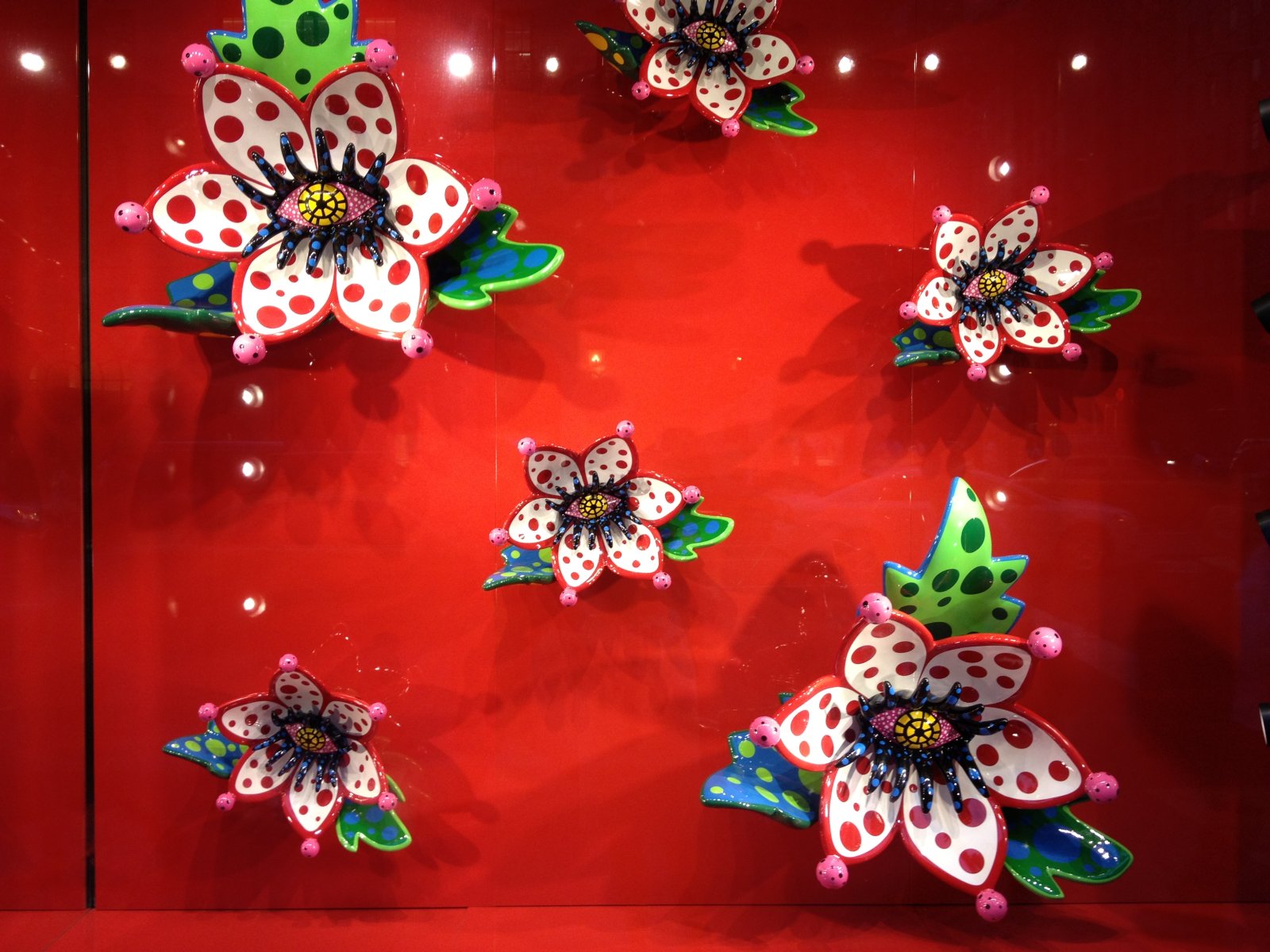 I have been meaning to write about this for weeks, though I confess to a certain reluctance about people and things I cannot pronounce. But I have been practicing: Yayoi Kusama. Just like it’s spelled really. I don’t know why I go so worked up about it. I was walking […]

I have been meaning to write about this for weeks, though I confess to a certain reluctance about people and things I cannot pronounce. But I have been practicing: Yayoi Kusama. Just like it’s spelled really. I don’t know why I go so worked up about it. I was walking down 5th Avenue minding my own business this summer when the Louis Vuitton window display gave me a start. With my razor-sharp powers of deduction I said to myself: These are not your grandmother’s steamer trunks.

If you’re in New York and haven’t seen her exhibit at the Whitney, this is the last week. Closes Sunday. It is bound to be a hoot, and I hate I missed it, but I’m back here on the ranch. The day I was in the neighborhood the museum was closed. I walked up to the door and stared in the window, like the way a dog looks at you when you are eating something out of the refrigerator and don’t give her any. (Yes Stella, I’m talking to you.)

If you want to read up on it, here is the Whitney’s newsletter for this week.

And because I am lazy, here is the Whitney’s description of the exhibit: “Well known for her use of dense patterns of polka dots and nets, as well as her intense, large-scale environments, Yayoi Kusama works in a variety of media… Born in Japan in 1929, Kusama came to the United States in 1957 and quickly found herself at the epicenter of the New York avant-garde. After achieving fame through groundbreaking exhibitions and art “happenings,” she returned to her native country in 1973 and is now one of Japan’s most prominent contemporary artists. This retrospective features works spanning Kusama’s career.”

If you are wondering what the epi-center of the avant-garde looked like back then, it must have been something like this:

There is also an installation called “Fireflies on the Water,” which looks very cool. The Whitney’s website has a video of it, if you’re feeling avant-garde-ish.

Back to the windows.

Now I have to say I do not look at pictures of Ms. Kusama and think “barrel of monkeys.” But I could be completely wrong about that. She sure has a barrel of monkeys in her imagination.

Oh, and about Louis Vuitton. They’re a sponsor of the exhibitions both here and in the UK, and there is a Yayoi Kusama Collection. You probably saw that coming.

My fashion coverage has been spotty lately…

Just in – a few of my with-it readers told me about the CBS Sunday Morning piece that ran recently. See Mo Rocca’s interview here. It’s actually fascinating. She lives voluntarily in a mental hospital. Lord…. And just now another reader wrote with a post of an installation Kusama did with children in Australia, and the reader, Maureen, wants to try it in her town of Tarboro, NC. Would be a first for Tarboro, I’d say. Here it is, via ThisIsColossal.com: