Well I’m just full a beans today with so much to tell. Last night. Tout New York was at Phillips de Pury for the divine James de Givenchy’s reception for the equally divine Muriel Brandolini, there to sign her new book, The World of Muriel Brandolini, and to preview the coming sale of some of her furniture, objects and art. Fab.

Muriel herself swanned in around 7 in a fitted sheath of silvery and gray brocade and a fox furry thing around her shoulders that framed her face like she was in the movies. She has that permanent glamour tan that only the Italians seem to pull off. I mean the girl has got it going on.

She knew everybody in the room, or had the grace to act like she did, and everybody knew her. It was the same way at Barney’s last week, when James hosted a(nother) book signing party for her. It was mobbed, and fun. You didn’t want to leave.

And when you go to Muriel’s website, you won’t want to leave that either. It’s all I can do to get this post written because I keep reading the book and browsing her site. By the way, you can click on any of the words in green to link directly to that site.

The book is gorgeous and as great to read as it is to look at. Written with Amy Tai, photos by Pieter Estersohn, and introduction by Wendy Goodman. Incidentally, all of these room shots are my photos of the photos by Pieter Esthersohn, all of which, I assure you, are in perfect focus, unlike mine.

If you’d like to order it, and you should, there’s a terrific little independent bookshop around the corner from me on Lexington Avenue called Archivia (click on to link, but finish reading this first) , and they have the best selection of design books I’ve ever seen. You won’t want to leave there either.

Meanwhile, pieces of the world of Muriel Brandolini about to be auctioned are on exhibit at Phillips de Pury & Company until Friday, October 21, when the sale takes place. 450 Park Avenue, 212-940-1300. It is very cool to see the catalog alongside her book, where so many of the items are photographed formerly in situ. 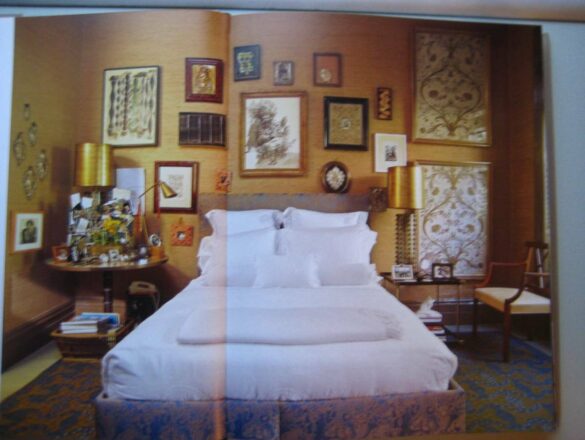 The ninth floor of Barney’s is also celebrating the world of Muriel, and in case you missed it, there’s a wonderful piece by Whitney Robinson in the October issue of Town & Country, “Muriel’s Moment.” Muriel’s moment indeed.

And last but certainly not least, do you know about the jewelry designed by James de Givenchy? He is the superlative fashion designer Hubert’s nephew, so the apple doesn’t fall far from the tree. James’s company is called Taffin, and his designs are to die. I am lucky – okay really lucky – to have a few of his things, and I treasure them. Also treasure him, because he is just a doll, period. You should see his website, Taffin.com, too; or visit his Midtown Manhattan showroom at 685 Fifth Avenue, but call first: 212-421-6222

So much energy, beauty and inspiration wrapped up, in, and around Muriel and James I’m nearly exhausted by it. I’m going to have to lie down.